Map    Get Directions
Dom B

I was with the guy below my comment. If you have a death wish, go visit. Tried to warn other motorists going to visit but felt like ripping down all the signs. Please do not go anywhere near.

As you do when you're young, me and a friend rented a quad bike out and went to explore some of Zante's buetiful scenery. We were in the main town, Zante town as it goes by and driving along the sea front came across a sign saying 'best view of Zante'. Thought we'd go check it out. This was about 17.30 in the afternoon, still sunny, still lively. We followed the signs off the main road and accedently missed the last right turn. We though as were on a quad with no reverse and narrow roads we'd carry on and find somewhere to turn round. This is when a stray dog came running up at us and started barking with it's teeth out on show. That attracted about 5 others which started chasing. We put our foot down and sped off to a dead end. Luckily there was enough space to turn around. They were all there, barking so we never stopped and carried on. Never did anything to them, but would have quite happily drove into one to leave the area quickly. So as we were heading back to the last sign posted sign 'the best view in Zante', we went down the correct road. Came into a car park which had a couple of cars already parked in. There was a couple (not british) also on a quad which had got there a few minutes before us. He said it's weird, it's quite, there's high walls and the gate was locked. The walls were terra-cotta which is normal for a Greek area but built on top of them was standard breeze blocks towering high. We had gotten off our quad at this time. Next thing you know an older Greek man had opened another gate, shouting at us say go away, leave now, quickly waving his arms! We all looked at each other thinking what is this place. It was that moment were I couldn't get the keys in the quad quick enough turn it on turn round and drive about 100mph out the exit. The man looked angry as we raced passed him. Terrifying moment. Because we were scared we drove fast down the hill thinking the worst could happen, someone chasing us with a gun or something. This place looked like a prison, thought we were going to get kidnapped. This is a no go place!!!!

Avoid at all costs! The biggest rip off in what has been otherwise a fantastic holiday. In retrospect, driving up to somewhere that looked like it had prison walls surrounding it should have been warning enough to turn round. I ended up warning other travellers as we left to prevent them doing the same.

do not go there!! we were 'welcomed' by an extremly rude and violent woman..medium height, brunnette, fat ,big brown eyes most probably she was on drugs.... who smelled like a rat. she treated us like hell..threatening us that she is a police officer.and said that she could arrest us jst because we were tourists in her country...of course she did not have a police id and she was just a filthy waiter..everything is very expensive..just to enter there you have to pay..2.5 euros and it is not worth it. that woman was very agressive , she was asking for a boxig lesson..she did not allow us to take photos and tried to take our cameras using the force... as if that wasn t enough...when we left from zante s**t view...an old man came with a a gun. if you decide to go there and you meet that drugged woman..do not hesitate to punch her in the face for us..and do not allow her to treat you like rubbish

just complete and utter s**te. do not go there on all accounts!! dreadful food, rude staff, outrageous prices and apalling atmosphere. just drive 2 minutes further to the venetian fortress for a better view, friendly service and regular prices.

After a long drive to check out this bold statement of a taverna. I felt like I was driving into a prison as walls have been built high up to block any view. The entrance was like entering a strip bar again all efforts made to stop you from seeing the view. Finally I was greater by a women saying you can't just come in. It's not free. For anyone who wants a nice view went upto the fortress and they have many bars and restaurants, not cheap but the view is better as when I got home I checked the picture on the Internet. Maybe if they promoted it as I nice friendly bar was amazing views and put the views out in the open rather than trying to avoid people seeing before they can enter then they would be very busy Very disappointed!!!!

Absolute rip off and has not improved since 2002 by the looks of it. 11 euro for 2 cokes and half a shandy!!! When we said that is too expensive, her response was, 'you are English, right'? What on earth has that got to do with it and actually, no, we were not! We had such a wonderful 2 weeks in Zante and was out for a drive to find out whats out and about the island, intrigued by the best view in Zante, very disappointed and it sets a very bad example on a lovely friendly island.

After following the signs up the hills round long and winding roads we reached it we were greeted at the door by the waiter (come bouncer) who said we had to buy a drink or a ticket to enter! we agreed only to find VERY expensive drinks & food my husband had a beer 5 euros I think & I opted for a hamburger deal ( came with a soft drink) 8 euros NO THRILLS FOOD!it was too late once you were in you were CONNED! I think you would only know about it by following the signs! you wouldn't recommend it to a friend (or enemy)! On the plus side you get a good view of Zante Town and harbour but why pay entrance fee to go into a resturant with a view,if it was an attraction ie The water park you could understand it!!!

A complete disgrace, don't visite this

1/10
Followed the numerous signs to "The best view in the Island" which took us to the Panoramika. We ordered two small bottles of lemonade and were astonished to be charged 8 euros. This was in contrast to every other bar and restaurant we visited on the island where the prices were very reasonable. The view is actually much better from the restaurant near the fort.
View 3 posts by Des B

I can say with certainty that this is the worse place I have ever visited in Greece.  We visited on Saturday 26 September 2009 after a long drive in the rain.  The signs advertising the best view on the island were very tempting and on arrival the view was certianly very good.  What was not so good was the leaky roof, average food and extortionate prices.  The owner of this establishment is a disgrace to all other pleasant, honest and hardworking Greek people.  We had a week full of beautiful homemade Greek dishes served by nice people at very reasonable prices - this was the only exception.

It was as advertised "The best view of the Island", however you pay for the view.  We found this location very expensive.

After visiting the 'Best View of the Island' four years running we were extremely disappointed to find that this year you could not enter the bar/ restaurant/ view without first ordering drinks! No menu/ prices were displayed & the waiter, pleasant that he was, insisted we order something on the door step! Minimum drinks price (including water) was 3.95 euro, though after speaking with some Greek friends, apparently these are tourist prices & the price for fluent Greek speakers is 1.50!! (Water).

Staff were friendly & helpful, view is lovely, but comparable, if not less favourable than that of nearby Bohali where there are many cheaper places to eat/ drink & where prices are displayed on the menus.
View 2 posts by Debs J

The view is well worth it, however the cost aint. Realy expensive as we paid 8 euros for two drinks.
I will just stick to my photos i got and keep me 8 euros next time.
However you are paying for view.

We only went here for an ice-cream and a drink (after cycling from the main road where we saw it signposted). The view was excellent (thankfully - after cycling all that way!). It was a little bit more expensive but then the view is fantastic and you don't pay for that so you have to expect to pay a little bit more. Service was very good and the staff were very friendly.

can anybody help me? i went to a restraunt while in zante and met the nicest waiter, his name was marinus (dont know if that is the correct spelling) please email me if you have any details at jen_chick89@hotmail.com. the restraunt was in the town centre of zackynthos. thank you! x

can anybody help me? i went to a restraunt while in zante and met the nicest waiter, his name was marinus (dont know if that is the correct spelling) please email me if you have any details at jen_chick89@hotmail.com. the restraunt was in the town centre of zackynthos. thank you! x

The worst and most expensive resturant on the Island!!! Ł4:50 for an orange juice.. The waiters also smelt like rats

The view from this bar/restaurant really is amazing - it's up on the top of the hill behind Zante town. The service was also friendly and good. However, it was mid morning and we just ordered 4 cokes, and paid the equivalent of Ł10 for them!!!!!! So do go, but be prepared to pay for the view.

Panorama's outdoor bar is perched on the edge of a terrace on top of the hill overlooking Zante town, set among gum trees. A lovely setting with a superb view. Well worth a visit (as is the Venetian fort higher up the hill). We only had drinks so can't comment on the food. 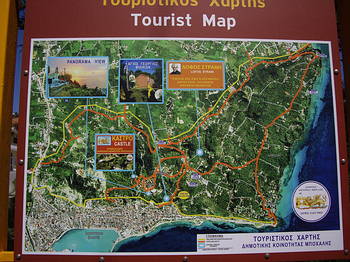